Tel Aviv University and IDC Herzliya: Most Hurricanes That Hit The US Start in The Exact Same Location 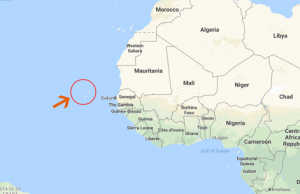 Just weeks after Hurricane Harvey caused destruction in Texas, Irma has made landfall in Florida – and there are still almost 12 weeks left of Atlantic hurricane season. It raises the question – where are all of these storms coming from?

Research has shown that most of the monster storms that hit the US and Canada start out as a distinct weather pattern in the atmosphere over western Africa, specifically a spot off the coast of the African Cape Verde islands.

In fact, a 2015 study published in Geophysical Research Letters showed that by closely watching these tropical disturbances off the coast of western Africa, researchers could better predict which of them would turn into serious hurricanes a few weeks later.

“85 percent of the most intense hurricanes affecting the US and Canada start off as disturbances in the atmosphere over western Africa,” said lead researcher Colin Price from Tel Aviv University in Israel at the time.

“We found that the larger the area covered by the disturbances, the higher the chance they would develop into hurricanes only one to two weeks later.”

Interestingly, these hurricanes are directly linked to one of the driest places on Earth – the Sahara desert.

The interaction between the hot dry air of the Sahara and the cooler, more humid air from the Gulf of Guinea to its South forms what’s known as the African easterly jet, which blows from east to west across Africa. 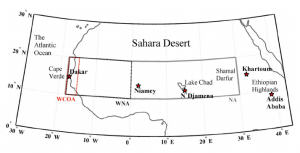 Within this jet, atmospheric disturbances or bands of thunderstorm activity known as tropical waves can form. As they blow off the west coast of Africa past Cape Verde, the 2015 study showed that the amount of cloud coverage at that point can predict whether or not these tropical waves will become hurricanes a week or two later.

How does that happen? Tropical waves interact with the warm equatorial water of the Atlantic as they head west, triggering columns of warm moist air to rise from the ocean.

That provides two of the three ingredients required for tropical storms to turn into full-blown hurricanes: moist air; Earth’s rotation; and warm ocean temperatures. When the swirling winds reach speeds of 74 mph (119 km/h), the storm is classified as a Category 1 hurricane.

Irma was first spotted as a tropical disturbance off the Cape Verde Islands in late August, before becoming a hurricane over the Atlantic as it made its way towards the Caribbean and US.

According to Price, only 10 percent of the 60 disturbances originating in Africa every year turn into hurricanes – but the ones that do have the opportunity to gather energy as they cross the Atlantic, which makes them so powerful that they’re more likely to hit the US and even Canada.

“Not all hurricanes that form in the Atlantic originate near Cape Verde, but this has been the case for most of the major hurricanes that have impacted the continental United States,” writes the NOAA.

Researchers around the world are now working on better being able to predict which of these disturbances is worth watching and preparing for.

“If we can predict a hurricane one or two weeks in advance — the entire lifespan of a hurricane — imagine how much better prepared cities and towns can be to meet these phenomena head on,” said Price.