Haifa U.: Israel Was Vastly Unprepared for Oil Spill, and Shouldn’t Have Been 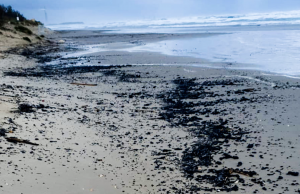 Ilana Berman-Frank, Director of The Leon H. Charney School of Marine Sciences at University of Haifa explains how European satellites detected oil on the sea’s surface long before Israel even found out about the spill; Stresses this will happen again if country doesn’t learn from its mistakes; Warns of long-term damage, including to country’s drinking water.

“Although there is a national plan for dealing with marine oil spills and pollution, Israel showed with this event that it is currently vastly underprepared to deal with such incidents. In fact, the oil on the surface seawater was detected by European satellites long before Israel even found out about the spill. If caught on time, we can minimize the damage we’re dealing with. We must be able to identify spills immediately by forecasting and monitoring the situation, in parallel. The technology is there but Israeli regulatory branches need to get their act together and implement this before we’re left to deal with another disaster. Technologies are available and include satellite and remote sensing techniques as well as gliders and buoys with sensors for environmental variables like currents, waves, and oil detection.

“Resources need to be allocated so that technologies and professional personnel can monitor the environment before, during, and after the polluting events. This will allow us to act quickly rather than waiting over a week from when the oil was first observed at sea. Once the oil has reached the shore, dealing with the damage is too late. And unless we act, this will happen again. The Eastern Mediterranean is one of the most used shipping routes so is more prone to such disasters. At the same time is also one of the most sensitive marine areas to environmental pressures and disasters and it is therefore important to continuously monitor to prevent and mitigate any potential incidents.

“There also needs to be a more centralized effort to handle such disasters too. We can’t rely on thousands of volunteers to clean our contaminated beaches. Right now the Ministry of Environmental Protection handles protection in the water and once it hits the shores, it becomes the responsibility of the local authorities, which are aided by different organizations such as the Nature and National Parks Authority. The whole process needs to be managed and overseen by a central governing body.

“Right now we’re focussed on addressing the immediate impact of the spill but this will undoubtedly have long-term repercussions too, with potential changes to the food cycle and accumulation of toxins. Furthermore, over 60% of Israel’s drinking water comes from the sea so this can also become a concern if spills reach the country’s five large-scale water desalination plants.”