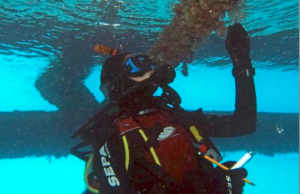 Shenkar is one of the 25 taxonomists at the Steinhardt Museum, which is currently under construction on the TAU campus.

Trained at TAU with a post-doctoral degree from the University of Washington at Seattle, Shenkar, 38, spends as much time as possible under the water. She is fascinated by ascidians – unique invertebrates also known as “sea squirts” that filter their food from the water. “Ascidians feed on the tiniest particles in the ocean, making them an important link in the food chain,” says Shenkar. “They also shed light on the condition of the marine environment.”

Shenkar is regularly approached by marine biologists throughout the Middle East, including from the Gulf States and Iran.

Recently, Shenkar hosted Turkish researcher Dr. Sinem Aydin (pictured right) of Dokuz Eylul University’s Institute of Marine Sciences and Technology to train in her lab for a week. Aydin is researching the use of ascidians as biological indicators for monitoring heavy metal pollution in the Eastern Aegean waters.

“I came to Israel because Dr. Shenkar is an expert in this field of research. She gave me basic training in ascidian taxonomy and helped me improve my dissection skills and work with taxonomic keys for accurate identification,” says Aydin. “There is no expert in this field in Turkey so my experience at Tel Aviv University will go a long way to closing this deficit,” she says.

For Shenkar, cooperation with her Turkish colleague represents a way of promoting peace in the region through ascidians. “Of course, I can’t achieve peace on my own, but scientific dialogue is a step in the right direction,” she says.