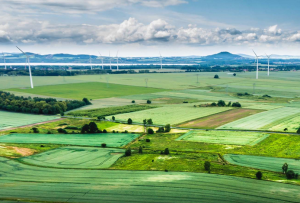 Enlight Renewable Energy has secured financing for a 189 MW wind project in the Israeli-controlled Golan Heights, at the border with Syria and Lebanon. A consortium of banks and financial institutions led by Bank Hapoalim will lend ILS1.05bn (US$308m) to the ILS1.25bn project (US$366m), while Enlight and its partner will invest the remaining ILS200m (US$59m). The company has already secured building approvals for the project, which will consist of 39 GE turbines, and still awaits approval from the state-owned power utility Israel Electric Corporation (IEC) to start construction. Construction will take 2-3 years.

Enlight Renewable Energy stands at the forefront of the green energy revolution. A leader in its field, the company is publically traded on TASE (Tel Aviv Stock Exchange).Since its foundation in 2008, Enlight has endeavored to create value through its energy and infrastructure initiatives. The company specializes in the initiation, development, financing, construction, management, and operation of projects involving the generation of electricity from renewable energy sources. Enlight operates at a large scale both locally and globally, having successfully executed over 150 projects in Israel and in Europe at a capacity exceeding 500 MW encompassing a total construction cost of over US$1 billion. The company is currently developing a broad project portfolio at different development stages, involving over 1 GW.

Since its establishment, Enlight’s global operations have developed at an accelerating pace, serving as one of the company’s central growth factors. Enlight’s senior executive team brings vast experience and expertise in the initiation and management of widely deployed, complex projects, showing a clear success track in the fields of energy, infrastructures, engineering, and financing. In a world where renewable energy comprises a substantial and growing share of the energy market (most new power plants worldwide employ such technologies), our experience and expertise, combined with the right business model, excellent execution capabilities and financial security, position Enlight as a leading entrepreneurial player in the market.

With respect to energy, the world continues to revolve, yet it is certainly changing direction. The new direction: renewable energy; an end to contaminating, climate-changing fuels, an end to energetic dependency on oil countries. The future looks clean, green, and renewable. This is one of the most important and significant revolutions ever affecting the world at large and all of its inhabitants. Unlike other revolutions, however, the renewable energy revolution is based on positive energy: energies originating in the sun, wind, and water; energies that offer a secure source of energy for all modern needs while preserving our lives, health, and environment. Looking at the data, it is clear that this is not some distant vision, but rather a revolution in the making: over 70% of the power plants erected within the EU in the past three years are based on renewable energy and in coming years renewables will become a central source of energy worldwide for the production of electricity, for heating and for transportation.

Naturally, the renewable energy revolution, including its multiple methods of production, drives tremendous economic engines that offer unusual business opportunities. The investment in renewable energy is at a rare point of feasibility. Leading technologies such as solar panels and wind turbines have matured, becoming cheap, efficient and accessible, while the production of electricity is no longer dependent on government subsidies. This is a growing market, expanding significantly with a nearly imaginary scale of investment. Anyone grasping where the water flows, the wind blows, and the sun turns in this market of energy could enjoy the economic opportunities that lay within this fast-growing market

Photovoltaic technology is the chief method by which solar energy is converted to electrical energy, using solar panels. In recent years, costs of the photovoltaic system have been dramatically reduced, rendering the technology accessible and in demand, and thereby holding great energetic and financial potential. The increase in investment in solar energy is dazzling. For example, between the years 2012 and 2014, global investments in this technology have risen by some 25% to some 150 billion USD.
Research projects that by 2050 this technology will have become the main energy source worldwide. Enlight has accumulated considerable expertise in photovoltaic technology, both entrepreneurial and financial, including the erection, operation, and management of solar-based power plants. Enlight’s activities in this field encompasses numerous yielding assets – over 150 projects worldwide. Enlight’s rich experience and expertise allows for the successful implementation of photovoltaic projects of significant scale.

Hydroelectric energy employs the flow of water to move electricity-producing turbines. It is the most prevalent form of renewable energy on the planet. Pumped storage energy is used to store and generate large capacities of electricity based on the difference in elevation of two water reservoirs. Enlight is currently investigating opportunities in the field of pumped storage energy as well as hydroelectric energy.

Wind turbines convert the kinetic energy from wind into electricity that is clean as well as cheaper and more frugal where land use is concerned. With the rising worldwide-installed capacity, so rises the global investment in wind turbines. Accordingly, global investments in this technology have risen by more than 10% in the last years, representing an investment of over 100 billion USD. Enlight is the most prominent leader in the field of wind energy in Israel. The company is developing a pipeline of over 500 MW of wind energy projects in Israel alone, in addition to large scale Europe-based wind projects.