Technion and Haifa U.: You can’t just walk it off 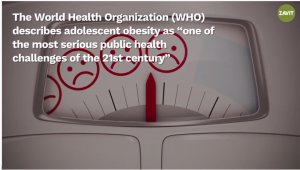 The World Health Organization (WHO) describes adolescent obesity as “one of the most serious public health challenges of the 21st century” and has impacted urban areas of many countries with low and middle-income status. Worldwide, obesity in children from ages 5 to 19 has increased from 11 million in 1975 to 124 million in 2016. The presence of obesity in general in regions such as the Middle East has increased by 20 percent from 1975 to 2016. In particular, the Middle East has one of the largest increases in child and adolescent obesity during this time period.

Risks that make adolescents more susceptible to obesity include poor diet, lack of physical activity, and home environments that do not promote healthy nutritional behaviors, such as the consumption of fruits and vegetables, and limiting the consumption of soft drinks. These factors are very important, especially with boys. When comparing gender, boys are more prone to obesity compared to girls, due to various differences. Even though boys tend to be more active, they are more likely to eat unhealthy foods, compared to girls.

Scientists at the University of Haifa and the Technion conducted a study that was published in May of this year that discusses the possible association between the built environment and obesity in adolescents in three different regional cities of Israel, Beer Sheva in the south, Haifa in the north, and Rishon LeZion in central Israel. This study was in collaboration with the International Physical Activity and the Environment Network (IPEN), which is based in San Diego, California.

These three particular cities were chosen in order to cover a wide array of natural conditions, such as differences in elevation, landscape, and temperatures. The built environment incorporates the following independent variables: residential density (ratio of housing units compared to residential use land), land use mix (distribution of land usage diversity including residential, commercial use, etc.), street intersection density, and walkability (how easy and inviting an area is for walking). All these variables describe the built environment of each city.

“These measures that we use for a built environment were developed by city planners and are used all around the world,” says Prof. Orna Baron-Epel, Head of the Research Center for Evaluation of Health Promotion Interventions at the University of Haifa and one of the authors of the aforementioned study. “This is a very powerful measure of how the environment looks,” she adds.

A telephone questionnaire modeled after research done by IPEN of 904 randomly selected teenagers living in Beer Sheva, Haifa, and Rishon LeZion, from ages 15 to 18 was conducted. The study compared how obesity is related to the built environment (or walkability), socioeconomic status, level of physical activity and sedentary habits, and nutrition at home.

Body Mass Index (BMI) was used to measure the obesity of each participant. “We did not get BMI from the child, but through Maccabi medical records,” says Baron-Epel, which strengthened the research since it was a completely objective variable.

The study found that the percentage of overweight (BMI of 25 to 30) and obese (BMI of 30 or above) adolescents was 29.2% in Beer Sheva, 22.5% in Haifa, and 23.9% in Rishon LeZion. However, according to statistical analysis, the results were not significant enough to draw any formal conclusions about one city having a higher obesity rate over the others.

When broken down by gender, boys had a significantly higher rate of obesity than girls in Haifa and Rishon LeZion. Boys also had higher obesity rates in Beer Sheva, but the difference between the two genders was not significant.

Of the three cities, Beer Sheva has the lowest socioeconomic status and the highest rates of obesity. This city also demonstrated an association between BMI and the built environment, which in this case, is walkability. The study found that overweight adolescents lived in less “walkable” parts of the city. Therefore, the findings from Beer Sheva support past studies.

The socioeconomic statuses of both Rishon LeZion and Haifa are higher than Beer Sheva. In this case, education and cultural habits surrounding food and an active lifestyle may play more of a role in obesity than the built environment.

In all, increased sedentary behaviors were significantly associated with both BMI and higher obesity rates. However, since not all three cities show a significant relationship between the variables associated with the built environment and obesity, they are not directly related. Rather, their connection is influenced by outside individual, social, and environmental circumstances.

This study found walkability does not have a significant effect on obesity in Israel. “From other research around the world, especially from IPEN, we expected an association between the built environment and obesity. This includes if the area one lives in is more inviting for physical activity or active transport (such as biking and walking). Then, you expect to have less obesity because people are more active,” says Baron-Epel. “We thought we would identify an association of obesity with walkability, but we did not find that in all of the locations, only Beer Sheva,” she adds.

Contradictory Results from Other Studies

When looking at the results of the study compared to others, Baron-Epel explains that it “seems that there are many variables that affect obesity and it is a much more complex issue compared to just obesity and the built environment.” She goes on to says that “many other factors are involved that we don’t completely understand yet.”

It is clear that there are many factors involved with obesity, for example, socioeconomic status. Most studies regarding the built environment have been conducted in the US. Therefore, “there is too much of a generalization taken from the US regarding this topic to other places. It is much more complex than that,” says Baron-Epel.

Importance of Obesity Prevention and Solutions

Obesity has many negative consequences. Excess weight can lead to an earlier onset of chronic diseases such as Type 2 diabetes and heart disease. Also, it is hard to maintain weight loss after excess weight gain, especially as a child or during adolescence. Therefore, the earlier on obesity occurs, the more likely he or she will be overweight or obese in adulthood. In addition, obesity can have psychosocial effects, including depression and chronic stress. Finally, education attainment was found to be lower in people with obesity. This can result in economic consequences and limited career choices.

Cities can help to prevent and curtail adolescent and child obesity and also decrease BMI by using environmental strategies to increase walkability. For example, Israel has made efforts to create walking paths with signs indicating the distance of the path, with drinking fountains, playgrounds, and work out areas throughout. Baron-Epel says that this is one way to promote activity. This is especially important for peripheral areas of cities.

“There are so many variables that are affecting obesity that we don’t understand,” says Baron-Epel. Therefore, the only way to truly understand what is happening is by doing more research. “We can’t measure all factors that affect obesity in one study. We need to study a larger variety of cities to understand the complexity of the association, since what we can learn from just three cities is very limited” she says. With the help of IPEN, which has research happening in over 60 countries, research is moving in that direction, and with more data will come more concrete answers.