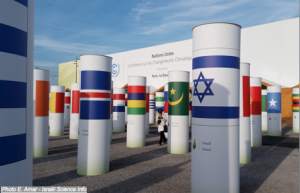 Robert Zbili, chairman KKl JNF France told Israel Science Info: “This is a success at three levels: the agreement between the Parties climate is a victory for the planet and for Israel that participated in the negotiations; it is also an extraordinary experience because the JNF booth, main actor of Israel at the COP21, has received numerous visits from many countries, including traditionally opposed to Israel; in terms technology, this is a very important achievement for Israeli companies presented at COP21, Israel was able to show and prove its universality in the most important global meeting ever held. COP21 sparked a global awareness and an unprecedented commitment to protect the planet through solidarity and joint action “.

Two weeks of intense negotiations at the Paris Climate Conference have ended with a historic, far-reach agreement that could lead to a global shift to a low-carbon economy. In accordance with the treaty signed Saturday night, Dec. 12, 2015, governments around the world will take steps to limit global warming to 1.5o Celsius, below even the 2o Celsius that was considered the limit at the 2009 Copenhagen Conference.

The agreement stipulates that nearly all 195 Parties to the UN Framework Convention on Climate Change (UNFCCC), except for the poorest countries, will be required to reduce greenhouse gas (GHG) emissions. Until now, under the Kyoto Protocol, only developed countries were required to reduce emissions. Massive emitters such as China and India did not fall into this category, and thus were not obligated to take part in the global effort to prevent climate change, and to combat the severe consequences of global warming. Israel was also not considered a developed country under Kyoto.

Envoys in Paris have agreed an international accord to limit greenhouse gas emissions that marks a turning point in more than 20 years of effort to prevent dangerous levels of global warming. Delegates from nearly 200 nations cheered and hugged one another on the floor of the convention centre hall at Le Bourget airport, north of the city centre, as France’s foreign minister, Laurent Fabius, declared the new pact had been formally adopted, just before 7:30pm in Paris.

John Kerry, the US secretary of state, said: “This is a tremendous victory for all of our citizens . . . It is a victory for all of the planet and for future generations . . . I know that all of us will be better off for the agreement we have finalised here today.”

Xie Zhenhua, China’s chief climate negotiator, hailed the agreement as a “milestone in the global efforts to respond to climate change”, even if was not perfect and contained “some areas in need of improvement”.

The new pact, to be known as the Paris Agreement, for the first time requires virtually every country in the world to set out its plans to avert climate change every five years.

It includes an objective to limit global warming to “well below 2C above pre-industrial levels” and “pursue efforts” to limit the temperature increase to 1.5C.

To meet these temperature targets, the draft says countries should aim to reach a “global peaking of greenhouse gas emissions” as soon as possible and “achieve a balance between anthropogenic emissions by sources and removals by sinks of greenhouse gases in the second half of this century”.

The text does not define precisely what this means, but scientists said it suggested that after 2050, countries could not emit more carbon dioxide — the greenhouse gas produced by burning fossil fuels — than what could be absorbed by forests and other carbon “sinks”…