Israeli scientists call on policymakers to act on climate change 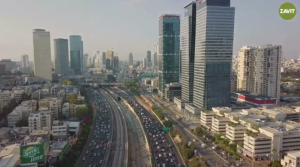 Coinciding with the UN Climate Action Summit in New York, Israeli scientists issued a large-scale petition urging their government to take radical action against climate change. “Climate change is happening here and now, and its effects are clear and palpable,” the experts say.

On 23 September at the United Nations headquarters in New York City, 65 countries pledged to cut their greenhouse gas (GHG) emissions to net-zero by the year 2050. Another 70 countries declared to push on with their national action plans until next year. According to the closing press release of the UN Climate Action Summit 2019, these “major announcements by government and private action leaders demonstrated growing recognition that the pace of climate action must be rapidly accelerated.”

While committing to such ambitious goals is a big step in the right direction, judging by the latest scientific consensus on global climate change, “a growing recognition” is still below the bare minimum anyone should ask for. The current UN report predicts that the impacts of climate change are very likely to “hit sooner and harder” than previously assessed. Based on the newest findings, the average global temperature from 2015 to 2019 is well on the way to exceed the temperature of any other consecutive period, ever recorded.

Although more and more nations are acknowledging the importance of acting on climate change and are pledging to take drastic measures to stave off the imminent consequences, current actions are still not good enough. According to the UN report, policies to lower CO2 emissions have to triple in order to stop warming at 2°C and even fivefold to meet the 1.5°C limit.

At the same time, in a region of the world that seems to be extremely vulnerable to the effects of climate change, the Israeli scientific community is pleading with their government to step up and adopt measures to contribute to the global fight against climate change.

In a recent petition, initiated by the Israel Society of Ecology and Environmental Sciences, Israeli environmental science experts from various fields have outlined the imminent risks associated with the implications of climate change. The call for action also contains solution approaches to combat climate change and a demand aimed at lawmakers, to establish an independent consulting scientific committee.

In the most striking section of the letter, the scientists address the impacts of climate change on a national level. Israel, like many other countries, is already grappling with the adverse effects of climate change, which can be seen by a number of local weather-related phenomena.

According to the experts, studies have shown that winters in Israel are becoming shorter, and the number of rainy days is on the decline. Thus, the dry season is becoming longer, causing an increased risk of forest fires during the early winter months. On the other hand, floods are also on the rise, as concentrated extreme rainfall events increase steadily. In addition, maximum daytime and nighttime temperatures, as well as daily average temperatures, have risen sharply. Compared to the global average, daily average temperatures in Israel climbed by up to 1.8 degrees Celsius across most of the areas, only in the last three decades.

The scientists agree that as the effects of climate change will get worse, Israel will need to ramp up its efforts to combat the crisis. In this regard, adequate preparations to mitigate the human and economic cost of climate change are just as vital as the consideration of security and political implications in Israel and the Middle East.

The petition contains direct steps, which the scientist urge the policymakers to adopt immediately in order to reduce the impacts of any adverse effects. Most importantly, the Israeli government should live up to its commitments of the December 2015 Paris Agreement and start cutting GHG emissions significantly. To this end, the production and usage of renewable energy resources have to be expanded on a local level – at the current rate, the 2020 goal of 10 percent renewables is very unlikely to be achieved. Simultaneously, Israel must reduce the use of fossil fuels and increase its energy efficiency. Further, a monitoring and reporting mechanism for emissions should be implemented.

Additionally, the petition suggests that public awareness about climate change needs to be further promoted by advancing educational efforts.

While acknowledging that climate change cannot be entirely reversed, the scientists recognize the economic and scientific potential that arises from it. Israel is often referred to as “start-up nation,” having paved the way for many modern technologies, especially within the water sector. Among those innovations are desalination technologies, drip irrigation,  methods for water reuse, reclamation of effluents, and the development of plants resistant to drought, heat, and salinity.

With all the knowledge Israeli industry has accumulated over the years, the scientists strongly believe that the country has the chance to become a leading force in the global fight against climate change.

In order to assess the risks, climate change poses on a global and local level the scientists behind the petition advocate for the implementation of an independent scientific committee made up of environmental scientists from a variety of disciplines and research institutions across Israel. According to the written proposal, the committee will “support the implementation of a science-based government policy, work to advance Israel’s preparedness for climate change and its ability to meet international commitments to reduce greenhouse gas emissions.”