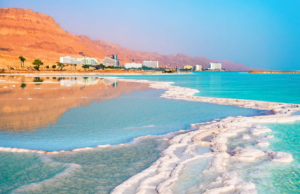 he $10 billion Red Sea-Dead Sea project will see the joining of two oceans in the Middle East to transport millions of cubic metres of seawater.

It took a miracle for Moses to part the waters of the Red Sea. But as if to adduce evidence that divine intervention is not always required, the ambitious $10 billion Red Sea-Dead Sea conduit project was recently signed between Israel, Jordan and the Palestinian authorities.

The historic agreement received its official seal of approval through the World Bank just two weeks before Christmas and has been heralded as the solution to Jordan’s water deficit and the Dead Sea’s ongoing and dramatic environmental degradation.

The multinational proposal is to build a 180 km pipeline engineered to carry up to two billion cubic metres of seawater per year from the Gulf of Aqaba on the Red Sea through Jordanian territory to the Red Sea.

In fact the notion of connecting the two seas by a conduit or canal is nothing new. Back in the late 19th century planners had pondered how to use the Jordan River for irrigation and to bring water to the Dead Sea. But like many well-intentioned projects in the Middle East and much talk of ‘saving the Dead Sea’ nothing actually happened.

Meanwhile the Dead Sea itself, considered by some as both the cradle of human culture and civilisation, has fallen from 394 meters below sea level in the 1960s to 423 meters below sea level today. The water surface has also shrunk dramatically – from 950 km2 square kilometres to 637 km2. Unlikely to dry up completely, it is predicted that its surface will diminish to an estimated 300 km2, with the water level continuing to drop at the alarming pace of one meter per year.

Yet Friends of the Earth Middle East (FoEME) and other environmental groups have countered that the mega-project was fatally flawed from the outset. They argued that the only sustainable solution is to tackle the source of the problem by rehabilitating the Jordan river which, since time immemorial, has fed the Dead Sea with fresh water. Such fresh water is now singularly lacking courtesy of massive diversions in the form of dams, canals and pumping stations constructed by Israel, Syria, Jordan and the Palestinian Authority alike.

Standing pensively on the shores of the Dead Sea Gidon Bromberg, Israeli director of FoEME, points to a now defunct hotel which had originally been built by the shoreline.

“You see that building. It’s now over one kilometre away,” he laments. “And you know why? Because 98% of the flow of the Jordan River, which feeds the Dead Sea, has been diverted. Plus the World Bank is talking about three pipelines, a very large pipe according to the bank’s own report that would be some 60 meters in width – so we are also talking about a major scar on the landscape, massive pipes which would run above ground for the best part of 200 kms.”

And yet Jordan has been the strongest proponent of the Red-Dead canal, as it is known in environmental circles. It’s easy to see why: the country’s access to fresh water is among the most restricted in the world. One of the world’s four poorest countries in respect of its water resources, Jordan produces around 880 billion cubic meters distributed over drinking household consumption and other economic activities and agriculture which alone consume 58% of total water. Water rationing is a part of everyday life.

A situation now made all the more acute by the influx of hundreds of thousands of Syrian refugees fleeing from that country’s long and bitterly fought out (and ongoing) civil war.

This explains why Saad Abu Hamour, secretary general of the Jordan Valley Authority and Jordanian head of the Israel-Jordan Joint Water Committee has gone out of his way to reaffirm his country’s ongoing support for the proposed conduit. “Potable water is a priority in Jordan and we are trying to secure it by linking the two seas,” he explains.

FoEME’s Munqeth Mehyar takes issue with this view. “The whole plan takes place on Jordanian territory,” he says from his office in Amman. “But Jordan is being hard-hit by the global economic downturn. That doesn’t bode well for international aid. Besides, the project will employ just 1,700 people and that amount only during the peak years of construction.”

A leading engineering from Jordan’s water company LLC will only speak to the WWi if his anonymity remains protected on the grounds that “what I have to say is a little bit political and puts me in an awkward position”.

Once given such an assurance, however, he can hardly contain his enthusiasm for the project, lamenting the fact that Israel’s interest in the project at one point appeared to be waning on account of delays.

“The fact remains, however, that this project is a way out of our water scarcity problems, made all the more acute now because of the vast numbers of refugees coming in from Syria,” he says.

“So Jordan clear has a major interest in moving the project forward – big time. Of course it’s a delicate subject in this region – although there is now a peace treaty between Israel and Jordan what will happen to the project if tensions rise or come to be strained? But it remains my firm believe that the advantages far outweigh the disadvantages, not least because of escalating demand for water triggered off by political instability in neighbouring countries. It was frustrating to know that there is a solution to hand but that it took so long for the international machinery to creak into action. But now, finally, we are on our way.”

The water surface of the Dead Sea has shrunk dramatically – from 950 km2 square kilometres to 637 km2. The illustration shows the sea picture in 1972 and then in 2011

The World Bank to date has held public forums in Amman and Aqaba in Jordan, Eilat and Jerusalem in Israel, and Ramallah and Jericho which come under the auspices of the Palestinian Authority. These public discourses had as their theme three major World Bank reports – a feasibility study, an environmental and social assessment and a study of alternatives. Their conclusion was unambiguous – that the project was indeed feasible from engineering, economic and environmental standpoints.

Their preferred method for importing substantial quantities of water from the Red Sea is to build a pumping station near Aqaba – pump it up to a high point – and then let it flow via a combination of pipelines and tunnels to the area south of the Dead Sea.

The plant would have a capcity of 320 million m3/year at start up, rising to 850 m3/year by 2060. It would require 247 MW of power in 2020 and 556 MW in 2060. The post-desalination high-salinity water would be piped to the Dead Sea with a view to halting, and eventually reversing, its shrinkage. Furthermore a hydroelectric plant would be built, supplying electricity to Jordan, Israel and the Palestinian Authority.

Dr. Alex McPhail, who heads up the World Bank’s Red Sea-Dead Sea study programme as task team leader, highlights the fact that the assessment, led by the international consultancy Environmental Resources Management indicates that “all potential major environmental and social impacts can be mitigated to acceptable levels”.

The bank has acknowledged, however, that the environmental impact in relation to the mixing of different waters from different seas remains unclear and untested, with the distinct possibility that algae could start growing in the Dead Sea.

Dr Joseph Lati of the Dead Sea Works industry, one of the world’s leading potash fertiliser producers, carried out a range of independent experiments to explore the effects of mixing. The results were not particularly promising.

“What we found were crystals of gypsum floating on the brine in small containers with 70% Dead Sea water mixing with 30% Red Sea water.

“It’s a blooming of red coloured bacteria. Of course depending on the percentage mix there will be various degrees of blooming algae. So I would advise extreme caution in this project unless and until the full effects are known.”