What California Farmers Can Learn from Israel?s Water-Saving Practices 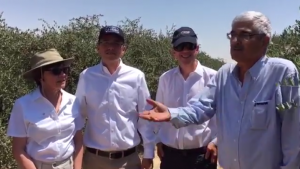 A delegation from the California Department of Food and Agriculture (CDFA) recently traveled to Israel to gain firsthand knowledge of the country?s advanced irrigation and planting strategies and technologies. Two almond industry members joined the group: Almond Board of California (ABC) Director of Agricultural Affairs Bob Curtis and almond grower Don Cameron of Terranova Ranch, Inc.

To experience Israel?s innovative irrigation system firsthand, the delegation visited Netafim, an irrigation technology company founded in 1965 by drip system creator Simcha Blass and the Kibbutz Halzerim. Blass, a water engineer, first introduced Israel to modern drip irrigation in the early 1960s. Since then, Israel has emerged as one of the most climate-smart agricultural regions in the world.

Located in the Negev Desert, Netafim also does business in California, where more than 70% of almond growers now use drip and microsprinkler irrigation.

The delegates also visited Rootility, a start-up plant breeding company. Rootility, which also conducts business in California, has found a way to give plants heartier root systems. Using a conditions simulation system, the company has developed strategies to improve plants? resilience to extreme temperature, drought and salinity. Such resilience allows plants to better absorb water and gain nutrients, a significant advancement in light of Israel?s dry conditions and dusty terrain.

CDFA Secretary Karen Ross led the 18-member delegation. She said California can learn a lot from Israel?s technological innovations, especially with regard to efficient irrigation, plant breeding for drought conditions and salinity, and recycled water.

?Eighty-five percent of the country?s wastewater is recycled for agricultural use,? Ross said, ?compared to just 9.5% in California.?

According to Ross, innovation and technology have played a significant role in transforming Israel from a nation of water scarcity to one of water security.

?It all works,? Ross said. ?They [Israelis] believe this is due in large part to the focus on agriculture. The country is able to produce most of the food it requires to feed its citizens, yet its per-capita water use is only one-third of California?s.?

Curtis said the delegation visit clearly demonstrated that farmers in California have much in common with their counterparts in Israel, and that both parties can work together to meet water and climate challenges.

For more information on the delegation?s visit, check out the CDFA Planting Seeds blog.