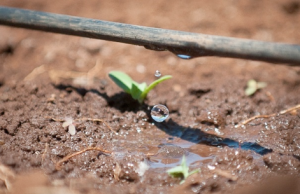 Hatzerim was one of the first kibbutzim (pl.) to break the mould from traditional agriculture and start a business. Netafim is the kibbutz business that started in 1965, that designs, manufactures and distributes irrigation systems. The business is also run with two other kibbutzim, Magal and Yiftach. There are also factories around the world, California, USA, South Africa, Western Australia and more. Netafim soon became a world leader in their field as a multinational corporation that grosses over $300 million a year.

In Kibbutz Hatzerim, where Netafim introduced drip irrigation 45 years ago, we irrigate a 400-hectare plot of Jojoba, with our subsurface drip irrigation system. The plot utilizes one dripperline per row of plants, and the drippers are spaced one meter apart from each other. The water used for irrigation is recycled wastewater from the Kibbutz and from Beer Sheva, a nearby city. This means that not only have the drippers been buried underground for over 10 years; the water that passes through them is quite challenging and prone to clogging.

Thanks to Netafim’s special labyrinth structure (Turbonet™) and anti-siphon mechanism, the system has not been clogged and is today as accurate as on day one. Netafim’s pressure compensated drippers (PC) and dripperlines feature continuously self-cleaning, thus avoiding clogging.
There are several algorithms built into the little dripper, ensuring that:

These algorithms are protected by several patents registered all over the world. With Netafim, the grower can enjoy the benefits of drip irrigation that were discussed in the panel, without any of the drawbacks that were presented.

Kibbutz Magal was founded in 1953 in the northern Sharon area and located adjacent to the Green Line. The kibbutz is known for its avocados and olives and for the highest quality olive oil produced mostly for the export market .Magal is home to approximately 1200 people living in comfortable attractive homes.

The award winning olive oil from Kibbutz Magal is cold pressed and extracted exclusively from the well cared for orchards and optimal soil and climate conditions of Emek Hefer, Israel’s historic land of olive oil. The groves cover more than 300 acres and are considered to be amongst the best in the country. Only a short time passes from harvest until the olives are pressed and stored under optimal temperature and humidity. The kibbutz developed a unique technology of shaking the trees and harvesting from the top of the trees downward. By contrast the local Arab farmers require 10 times the man labor hours to harvest an equal crop.

Also on the grounds of the kibbutz is world known Netafim an Israeli pioneer in drip irrigation technology. The company was founded by three kibbutzim in the 1960’s one in the north, Magal in the center and a third in the Negev. In 1966 it introduced the world’s first commercial dripper. In 1978 it introduced the world’s first pressure compensated dripper and in 1981 opened its first subsidiary outside of Israel. Today Netafim maintains 28 subsidiaries and 16 plants worldwide and employs 4000 people. The company’s website says, “Grow More With Less” and Netafim provides irrigation and greenhouse technologies around the world an example of how Israeli technology helps make the world a better place.

Roaming about the kibbutz one will find extensive stables for scores of horses and kennels for dogs. At the stables children with mild disabilities are seen caring for the animals.

One can hear the local muezzin’s call to prayer from the kibbutz but relations between the local Israel Arab residents with the kibbutzniks have always been good because it’s just good for business.