Former Mayor of New York City Rudolph Giuliani at BGU: “the future of IT is in Beersheva” 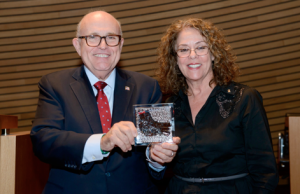 Former Mayor of New York City says Israel is the place to be for cybersecurity and big data applications. Former Mayor of New York City Rudolph Giuliani says that while he knew Israel was on the cutting edge of cybersecurity and information technology applications, he now knows where to find the latest technologies: in Beersheva.

On a visit this week to Ben-Gurion University of the Negev and the Deutsche Telekom Innovation Labs, Giuliani – who now serves as the new global chairman of law firm Greenberg Traurig’s Cybersecurity and Crisis Management Practice – said Israel’s south is the place to be for cybersecurity and big data applications.

“And now I can see the future. I can see you are going to accomplish even more. You are at the forefront of not only the new applications of information technology and meta data but how we protect it.

“Seeing this institution and what you’re doing, which has an enormously practical side to it and an enormously academic side to it. It marries the two things together. Very often I see institutions that are too practical and business oriented or too academic. This is a wonderful marriage. That’s really terrific and that is very unusual. It gives us great hope,” he said.

Giuliani said one of the reasons he joined Greenberg Traurig’s law firm was because of its connections to Israel.

“I joined the law firm because it has an office in Israel. I did it for two reasons.  First of all, I love your country. There are many reasons for that. I love coming here and have been coming here since 1985. I have enormous respect for it and I really love what you stand for and what you’ve accomplished and who you are,” he said.

Rudolph Giuliani tells BGU students: Now I can see the future…You are at the forefront of not only the new applications of information technology and meta data but how we protect it. Photo by Dani Machlis/BGU

The former mayor of New York City talked about how he managed to reduce crime during his tenure in the mid-1990s through the analysis of crime statistics in near real time.

“Without computers and statistical analysis, we would not have been able to reduce crime by 65 percent. At that time, we were losing more people in a year than the Afghan War. There were 6-7 murders a day.

“One day I was sitting in a famous bar in New York, Elaine’s, and head of the Transit Police Jack Maple came in. There are seven Transit Police precincts and he would go around at the end of the day and write the crimes that had been committed that day on napkins. Then he would come to the bar and lay out all the napkins and that’s how he would see the trends. I told him we should do that for all 77 police precincts in the city and that’s how CompStat was born,” Giuliani told the audience. “We could analyze the data and make the change the next day rather than next year or next month.”

Since then, he said, he has been a big believer in information technology and big data analysis. Before addressing students and faculty, Giuliani also visited the Deutsche Telekom Innovation Labs@BGU where he met with representatives of the University, EMC, JVP, and CyberSpark.

At the end of his talk, BGU President Prof. Rivka Carmi presented him with a dove of peace plaque.