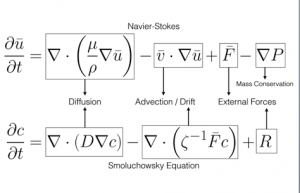 Are viscous fluids always smooth in three dimensions? The Navier-Stokes existence and smoothness problem is one of the seven most complex mathematical problems yet to be proven.

But Dr. Gal Davidi, an Israeli mathematician with a PhD in aerospace engineering, and his partner Svetlin Georgiev believe they found the solution, according to an official press release.

“Davidi and his partner Georgiev solved the problem and offered a way to prove the solution of the three-dimensional Navier-Stokes equations problem,” says leading mathematician Pedro Morais of Portugal, the first to endorse the new proof.

With 20 years of experience in aerospace engineering, Davidi, 47, founded six start-up companies in the field and is currently CEO of one of them. He received his doctorate from the Technion University of Technology in Israel and his post doctorate from the Rensselaer Polytechnic Institute in New York.

His partner Georgiev from Bulgaria is a well-known mathematician who has written several books on calculus and fractional dynamics in time scales.

Davidi has been working on the Navier-Stokes problem since 2008. Navier-Stokes equations, named after Claude-Louis Navier and George Gabriel Stokes, describe the motion of viscous substances.

Such equations have many applications for engineering and are widely used in calculating everything from aerodynamics of airplane wings to sea flow. However, over the 200 years since their discovery, no one has been able to prove that the equations are always correct in three dimensions. Until now.

With the possibility of winning $1,000,000 from the Clay Mathematics Institute for solving one of the millennial problems, Davidi and Georgiev invite mathematicians around the globe to read their proof and attempt to refute or affirm it.

If the proof is approved, Davidi and Georgiev will have made mathematical history.

A fan of equations? Think you can challenge Georgiev and Dr. Davidi? Here’s a link to the proof itself.