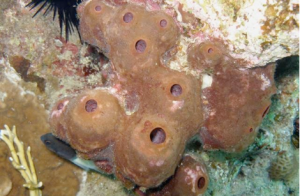 Arsenic is the leading freshwater contaminant on the planet, affecting millions of people worldwide and causing an untold number of deaths every year. Removing arsenic from groundwater and freshwater is a major challenge still facing scientists and policymakers. Now a new Tel Aviv University study published in Nature Communications sheds light on a unique biological model of arsenic detoxification.

According to the new research, the Entotheonella bacterium that inhabits the Theonella swinhoei sponge is one of the only known cases of a bacterium protecting its host from metal poisoning. Entotheonella safeguards these sponges against the dangers of arsenic and another common toxin, barium.

“This particular sponge species, which is among the most ancient animals inhabiting the earth today, is home to a very diverse, very crowded number of microorganisms,” said Prof. Micha Ilan of the Department of Zoology at TAU’s Faculty of Life Sciences, who led the study. “These sedentary animals evolved to contain an in-house arsenal of chemicals and associated microbiota to deal with predators and pathologies.”

While studying the biology of the sponge, which dwells in the Red Sea and the Indo-Pacific Ocean, Prof. Ilan and his colleague Dr. Boaz Mayzel discovered the curious ability of these sponges to accumulate and concentrate a million times more arsenic than that found in seawater. The results of that study were published in PLOS One in 2014.

Dr. Ray Keren, also of TAU’s Department of Zoology and co-author of the new research with Dr. Mayzel, suspected a bacterium was involved in the detoxification. Indeed, after extensive testing, a single bacterial species was found to drive the accumulation of both arsenic and barium.

“We have not only discovered that a single bacterial species was the accumulator of both arsenic and barium. We have also found that this bacterium mineralizes the toxic elements, transforming them into inert products within its cells in a controlled manner,” said Dr. Keren. “Sponges are eaten by turtles and worms, and even though they are exploding with arsenic, the bacteria renders them non-toxic. They become biologically inert. It is a very unique biological model.”

The TAU scientists, in collaboration with Prof. Boaz Pokroy of the Technion Institute of Science and Dr. Sirine Fakra of the Advanced Light Source in the Lawrence Berkeley National Lab, harnessed cutting-edge technology to validate their initial findings, which were procured using the backscatter mode of a scanning electron microscope. “Prof. Pokroy took a sample of Entotheonella to the European Synchrotron Radiation Facility within a week of seeing that first image,” said Dr. Keren. “There, he saw that barium is mineralized as barite and arsenic formed smaller peaks of an unknown mineral.”

“More work to be done”

Subsequent diffraction analysis revealed that the mineral, crystalline arsenic, was in fact calcium arsenate. Dr. Fakra then validated the presence of these minerals under subfreezing cryogenic conditions.

“To render this unique detox method applicable to other situations, we need to somehow get rid of the sponge,” said Prof. Ilan. “In other words, there is a lot more work to be done before we, human beings, can capitalize on this.”

The researchers are currently researching the mechanism the bacterium uses to control the mineralization of the elements. “Once we identify the enzymes involved in the process, we can either look for them in bacteria in polluted water or find a way to grow Entotheonella in polluted areas,” said Dr. Keren.